Sometimes We Need To Draw Lines

The recent announcement by JP Morgan of a $2 billion trading loss caught a lot of people’s attention and caused financial stocks to drop globally.

What would have happened if the trader in question had made money on the trade?  It definitely would not have made the news, or affected global capital markets.  But, would it have been criticized at the bank? What I am asking is whether the trade was wrong because it failed or wrong because an unnecessary risk was taken.  Of course this is speculation on my part.  Here is a quote from JP Morgan CEO Jamie Dimon:

It was a bad strategy, it was badly executed, became more complex, [and] it was poorly monitored,(i)

However, news reports suggest that Dimon was not taken by surprise by the trade, but that alarm bells began to ring when it became clear that the trade was not going well. (ii)  So, it seems likely that the problem with the trade was that it lost money.

There is a problem with this kind of reasoning - if it works out O.K. then it was the right thing to do.  If we let decisions be measured by whether they succeed or not, we will be in suspense until the outcome is arrived at.

We can’t substitute morality with the pursuit of profit.  If it is wrong for large banks to make speculative trades, it is wrong, and whether or not huge profits can be made is irrelevant.  I’m not going to discuss the proposed Volcker Rule or the effects of the repeal of Glass Steagall.  What interests me more is how we can be fooled into thinking that a decision that ends well was a good decision, and only when something goes wrong do we recognize that our decision was flawed.

We are especially prone to forget about moral principals where there is potential reward in front of us – especially if it’s financial.

If we want to improve society, and ethics on Wall Street, we need a system of moral standards that do not change to suit the situation.  We need a moral system that doesn’t just look at the outcome to determine if the right decision was made. We need moral standards that are a consistent guide in all situations.

Why It Doesn't Matter What You Believe If It's Not True 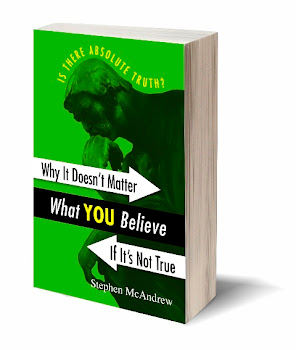 "For now we see through a glass, darkly; but then face to face: now I know in part; but then shall I know even as also I am known." - Paul of Tarsus